Stinky Pete And The Quest For Sustenance

In Stinky Pete you play as a homeless man in a small area of a town that has been cordoned off and evacuated due a bio hazard. There are two game modes. In the first you have to search the building for enough food to fill your hunger meter so you can sleep the night. In the second your hunger meter starts full and slowly decreases, you have to search the buildings to find food and survive as long as you can by stopping the hunger bar from being empty.
I made this project in my second year of University it was most used as a chance to improve my modeling and texturing skills. I did however also use this as an opportunity to improve my graphics programming by writing some custom shaders.  Stinky Pete can be played here. 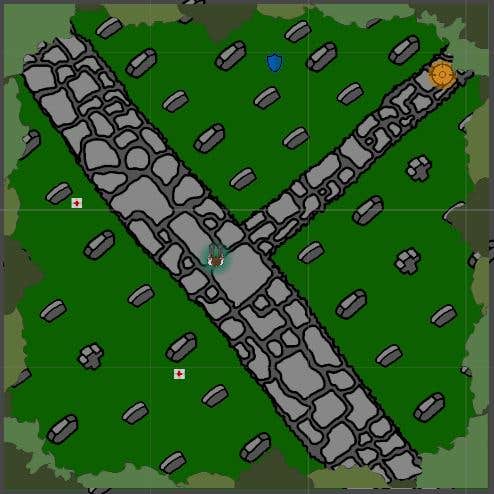 In Zombies Gone Wild you play as a lone survivor in either a graveyard or open field and have to kill as many zombies as you can while trying to survive for as long as possible. There are three types of pick ups available on each level. One is a standard health pack while the other two are more interesting; One is a shield allowing you to take extra damage and the other a damage boost making your gun do more damage.
I made this project in my first year of University; It was my first proper game made using Unity and really helped me get to grips with the basics of Unity and helped me understand how to code game mechanics. Zombies Gone Wild is available here.

In Emoji Plinko coins are spawned in every 0.1 seconds in random places each with one of five different emojis on it. You have 10 seconds to click on as many cat emojis as you can to gain points, however if you click on a coin with a dog emoji on you will lose points. Of the emojis two are cats with one worth 100 points and the other worst 500 points. Of the emojis three are dogs each worth -100 points.
I made this project in one hour for the 95th One Hour Game Jam which had the theme 😺 (Cat emoji), as such this game is more of a tech demo, but does demonstrate that this game could work and could work well. Emoji Plinko is available here.